I’m happy to announce that our work on analysis of metabolic flux ratios in human cells is now published in Metabolic Engineering. A flux ratio is the relative amount of metabolic flux that one reaction contributes to a metabolite pool — for example, the fraction of citrate that is derived from reductive carboxylation by isocitrate dehydrogenase. In cases where it is difficult to do absolute quantification of fluxes experimentally (particularly in vivo models), these are important parameters to estimate, and in this paper, we study several models of metabolic systems and try to get a handle on which flux ratios can be accurately estimated.

This is still a work in progress — we don’t know exactly how to choose parameters to get the optimal amount of information out of an experiment, and there is much to be done in testing these methods on a variety of experimental systems — but I think it’s a good step along the way. Enjoy!  :-)

I’m happy to announce that Irena’s methodology for metabolomics on sorted cell population has now been published as a video article in the Journal of Visualized Experiments.   We hope this movie helps illustrate the how this powerful technique can be used to study metabolism in complex cell communities.

A particularly interesting application of this method is to study metabolic cooperation between cell types, in co-culture systems or even in vivo. If you are interested in such experiments, let us know!

Last week, most lab members attended Metabolic Networks in Cancer, this year’s meeting of the International Society for Cancer Metabolism (ISCaM). It was an interesting meeting, with perhaps more biochemistry than usual (particularly pH regulation). But the most important event at the conference was of course Irena Roci winning the the best poster presentation award for her work on isotope tracing in sorted cells — congrats Irena!  :-) 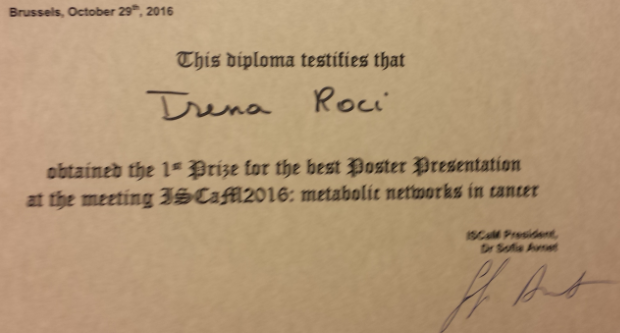 I think this method will be instrumental in many studies to come. Several groups are working in this direction, but Irena’s paper is the first to critically evaluate the methodology, and shows that isotope labeling is an important step to achieve robust results. There are many conceivable applications: subtypes of cultured cells, co-culture models,  selection of cell populations at cell cycle phases or at other states by fluorescent markers …  the list goes on. Now we have a great tool to probe the metabolism of such specific cell populations. Exciting times!  :)

This is an interesting (and free) alternative to ISI’s Journal Citation Reports: http://www.scimagojr.com/

Unlike ISI’s impact factor, the scoring system used by SCImago is based on weighted citations: a citation to a paper counts higher if it is made by authors who themselves have a high score. This leads to an interesting iterative algorithm for estimating scores. It is similar to the affinity propagation algorithm (this idea keeps popping up in different places).

There is an important parameter in this scheme, namely how strongly the citation count depends on the citing journal’s score (how strong is the weighting). With small or no weights, everyone’s citations count equally: you get a “democratic” system, but tend to favor “mainstream” opinions and hype; publications can then go viral, and the system is easy to game. With very strong weights, you avoid these problems, but this can lead to conservative, entrenched systems where only the most cited journals count, and alternatives to this “establishment” are suppressed. A middle ground is probably preferable, but where exactly this lies seems subjective. But it sure is interesting! :-)

It would be great to see scheme this applied to score individual papers rather than journals. Probably it has, but I haven’t seen it. Anyone?

We’ve recently seen evidence that some metabolites are not synthesized in the expected manner in HeLa cells. Creatine, a component of the energy-buffering phosphocreatine system, is one example. Creatine is thought to be synthesized from arginine, but when HeLa cells are labeled with arginine, creatine is still unlabeled, so this route cannot be active. Yet, the metabolite is clearly present.

Carnitine is another example: this metabolite is synthesized from trimethyl-lysine. We see nice labeling of the methyl groups in trimethyl-lysine in methionine-labeled cells (donated via SAM), but no label is found carnitine. So this pathway cannot be active either.

These metabolites are not in the RPMI-1640 medium, and the FBS used in these tracing experiments is dialyzed, so these metabolites should be endogenous. What’s going on? 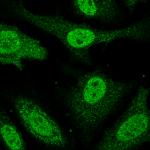 Our latest paper on the mitochondrial dehydrogenase MTHFD2, a cancer-associated enzyme, is now published in Scientific Reports. In this article by first author Nina Gustafsson-Sheppard (now with the Helleday lab at SciLife), we report that MTHFD2 is not only mitochondrial, but is present in the cell nucleus as well, and functions to drive cell proliferation by a mechanism independent of its enzymatic activity. This is important information for future studies aiming to target this protein pharmaceutically in cancer.

In the LC-MS data we’ve gathered over the past year, there is frequently strong peaks for N-acetylated amino acids, and there is clear incorporation of labeled acetate from U-13C-glucose, showing that these species are endogenously synthesized (over 48h incubations, mostly). It’s intriguing because, as far as I can tell, there is no known mechanism for N-acetylation of free amino acids in humans.

But it turns out that proteins are in fact often acetylated on their N- terminal amino acid. This phenomenon was discovered 40 years ago, but what the heck it’s good for is still being debated. So maybe this explains the N-acetyl amino acids we often see.  Or maybe it’s something different entirely …

A research group at Karolinska Institutet